President-elect Joe Biden has announced a tax plan that departs significantly from the policies and impact of major tax revisions proposed by President Trump and enacted in late 2017—and from the president's support for further reductions in top income and capital gains rates. I want to discuss the Biden Tax Plan and how it may affect you. There’s a lot of information in his plan but for now I’m going to concentrate on 4 specific areas.

First, income tax. You may have heard that in the Biden Plan it’s targeting high income earners, specifically people with annual incomes of over $400,000. He wants to raise the highest bracket from 37% to 39.6%. Which, currently consists of individuals with incomes of $518,400 and married filing jointly at $622,050.

But here’s the problem, it is not clear who that $400,000 income level is for. More specifically, we are unsure if that income level is for single taxpayers or married filing jointly. Now, as a planner that presents a challenge. So, we don’t know at this point, but a 2% hike may not seem like a big deal, but it can be a big deal depending on if it’s single or joint.

Well, you would have to pay a capital gains tax on that. And the amount you have to pay depends on your income tax bracket. With the Biden Tax Plan he wants to increase the capital gains tax and qualified dividend rate to 39.6% up from 23.8% for people earning more than 1 million dollars. 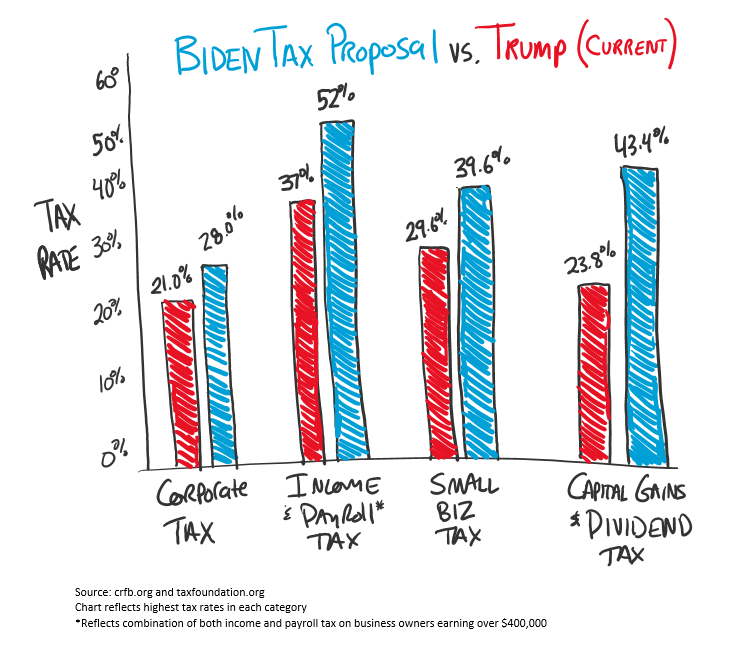 Under the Biden Tax Plan it calls for eliminating the step up in cost basis at death. Let me explain. Currently, everyone (not just the wealthy) who inherits stocks, mutual funds or real estate enjoy a step up in basis at death.

For example, let’s say you inherited a stock portfolio from your parents or grandparents. And let’s say it’s worth $500,000 but your parents or grandparents started with $100,000. That means $100,000 is their cost basis. In this example the gain is $400,000 which is unrealized. Well, currently the cost basis is calculated at what it was worth at death, which would be $500,000 and theoretically if you inherited it and sold it on date of death you would pay no taxes.

Under the Biden tax plan the cost basis would be calculated by the original cost (or $100,000) and you would have to pay taxes on the gain whether you sold it or not. This would affect everyone inheriting assets!

While there are no tax cuts in the plan there are some positives to this tax plan. For example:

So, what are the implications to you if this tax plan gets passed? Well, the proposed tax plan calls for tax revenue of some $3.4 trillion over 10 years, but Biden is calling for over $11 trillion in spending over 10 years. This means that even though he says no tax hikes for those with incomes under $400,000, it seems that possible future tax hikes on those under $400,000 would be inevitable. 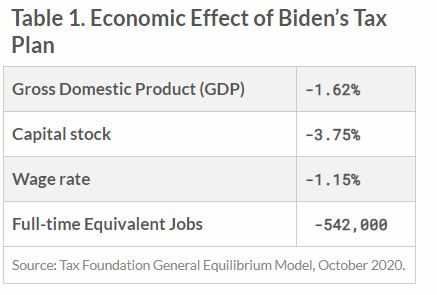 These are just a few of the proposed tax law changes, but there are many others. It is also important to note that some components are still unclear. This is why, as a financial consultant, tax law changes always present challenges and planning opportunities.

Finally, please remember that this is just a proposed plan and would have to be passed by congress before it could go into effect.

The opinions voiced in this material are for general information only and are not intended to provide specific advice or recommendations for any individual.

This information is not intended to be a substitute for specific individualized tax advice. Please seek a professional tax advisor.