2019 was a phenomenal year for equities with the S&P 500 returning over 30%. (source: Yahoo Finance) We saw just a couple of pullbacks in correction territory. The year was dominated by trade talks and the Feds.

Looking ahead in 2020 the forecast calls for slower growth in the economy with estimates between 1.5% to 2% GDP growth. (source: LPL Research, Bloomberg, JP Morgan Asset Management) U.S. equities should continue into positive territory, however, I would not anticipate the growth we saw in 2019 and most likely in the high single digits. Additionally, I would warn of more volatility than we saw last year as trade talks work themselves out and don’t be surprise of a correction or two soon. Internationally, I would anticipate a bumpy ride as Brexit works itself out and would see more potential in emerging markets.

Inflation has picked up a bit and I believe it will continue to grow but at healthy rate.

Now, let’s talk about the possibility of a recession. The yield curve did invert in August of 2019 which typically signals a recession ahead. (Source: Forbes 10/2/2019)

There’s always a risk of a recession. Recessions happen in one of two ways. One way is what we call an exogenous shock. For example in the 70’s when we had a steep rise in oil and gas prices. But those things by nature or somewhat unforecastable. The other way is when something big in the economy gets out of balance and when it corrects it pulls the entire economy with it. The last recession, the housing market was out of balance, early in 2000 it was tech. So when we look at today’s economy and ask what is wildly out of balance, there really is nothing wildly out of balance.

So is it possible for a recession, sure, but in my opinion and many other analyst, is not probable.

The other thing to talk about this year is that it is a presidential election year. According to the LPL research department, when the S&P 500 was positive 3 months before the election, the incumbent party tended to win. If stocks were down 3 months prior, it potentially signaled a change in power. Now this is not perfect, but in 20 of the last 23 presidential elections it has been correct. 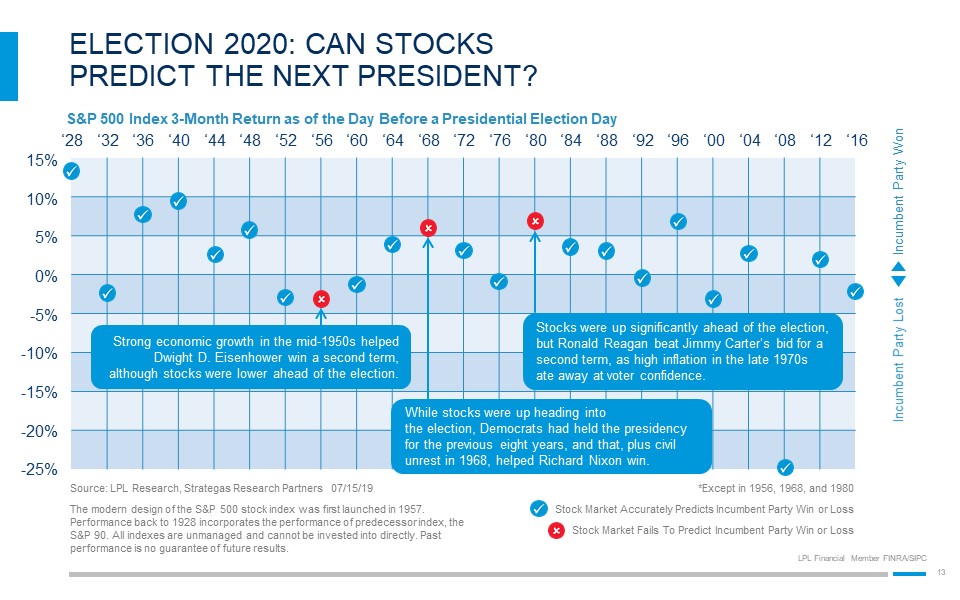 So in short, look for possible slower growth in the economy. U.S. equities have potential for positive returns, albeit, most likely in the mid to high single digits. Emerging markets are favored over developed international. And the risk of recession, may be possible but not probable.

The opinions voiced in this material are for general information only and are not intended to provide specific advice or recommendations for any individual. All performance referenced is historical and is no guarantee of future results. All indices are unmanaged and may not be invested into directly.

Economic forecasts set forth may not develop as predicted